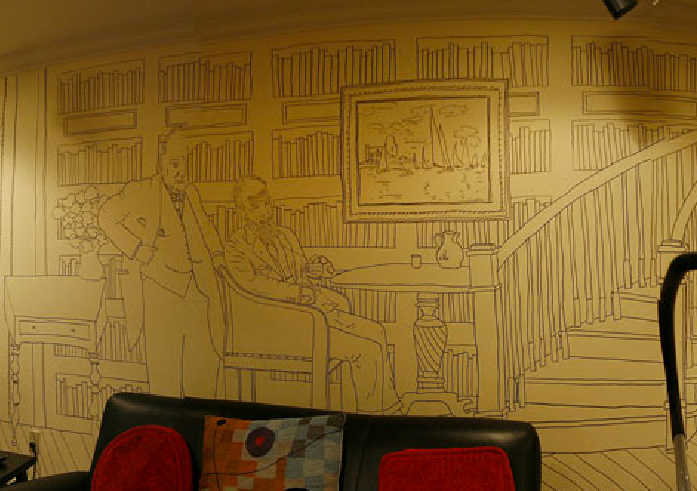 With boring basement walls painted a classic cream color, Charlie Kratzer decided to start on his new art project to include visual incitement . Inspired by impressionist art, it was deemed appropriate for him to explore the possibilities of enhancing his walls using such techniques. Ten dollars of Magic Marker and Sharpie later, the place was black and cream and drawn all over.

The Story By Cheryl Truman – ctruman@herald-leader.com

When Charlie Kratzer started on the basement art project in his south Lexington home, he was surrounded by walls painted a classic cream. Ten dollars of Magic Marker and Sharpie later, the place was black and cream and drawn all over.

There are fictional detectives Hercule Poirot and Sherlock Holmes, Winston Churchill lounging with George Bernard Shaw — and the TV squirrel Rocky and his less adroit moose pal Bullwinkle.
Says Kratzer of his cartoon of a cartoon: “You appreciate the cleverness more as an adult.”

There’s Georges Seurat’s Sunday Afternoon on the Island of La Grande Jatte. There is Blenheim Palace, the birthplace of Winston Churchill, and the Cornell Law School, of which Kratzer is an alumnus. There is Kratzer’s dad. There is the harlequin pattern — alluded to in culinary culture today by the Panera bread bag — and a fake fireplace facing a real one.

There are both The Walrus and the Carpenter (from Lewis Carroll’s Through the Looking Glass and What Alice Found There), and William Shakespeare. The Marx Brothers peer around a corner. A flip-top garbage can is transformed via marker art into Star Wars’ plucky little beeper R2D2.
Says Kratzer, 53, the associate general counsel for Lexmark: “People are amazed that with something as simple and inexpensive as a Sharpie, you can decorate a whole basement.”

How did this Sharpie world start? With a single swipe of the marker.

Kratzer started mid-wall, with the Salon by Picasso. Then he thought, well, taking a design out to the edge of the wall wouldn’t be overwhelming.

Then the rest of the basement flared off that first wall.

Kratzer’s basement suggests that the great cultural influences wandered out of college humanities class — here a Churchill for eloquence during harsh times, a Joan Crawford for cinematic vampiness, Holmes and Poirot for great literary characterization — and set up shop together in the carefully hand-drawn markings of an educated imagination come to life.

Kratzer might be a lawyer by day, but in his off hours he is a man who has taken the artistic influences and heroes of his life and imagined them onto his walls, that he might keep company with them while he uses the pool table.

Look carefully in this basement o’ dreams and you’ll see a drawing of the Kratzers’ upstairs library — with Claude Monet, the greatest of the Impressionists, at the doorway. It’s a tribute to Monet, but it’s also a way of living with cultural influences: Kratzer and his wife, Deb, don’t just keep them within book covers or admire them in museums. Their Picasso spends each day close to their pinball machine. Agatha Christie’s shrewd little Belgian detective and his carefully pruned mustache hover over the deck door.

From the main floor leading down to the basement, there is a color mural inspired by Picasso’s The Dream.

But through most of the spacious basement there is black line-drawing — around the pinball machine and the pool table and over the bathtub and toilet.

Why the black marker theme? Says Kratzer: “You can do a lot with it.”

Indeed, Sharpie art has its own little corner of the Internet: Artist Justine Ashbee, at www.justineashbee.com, features a gallery of intricate Sharpie art.

Kratzer likes the Impressionists, but he’s also inspired by Picasso — in particular the artist’s ability to convey a lot of information with just a few lines. A gathering at Picasso’s Paris salon in 1919 dominates a far wall, featuring a pantheon of artistic greats including Jean Cocteau, Erik Satie, Clive Bell and Olga Picasso, striking a kind of Sharpie synthesis of marker art between film, music, dance, literature and the muse.

While Kratzer’s basement mural art might have started with one mark, he had decided in his 30s that he wanted Impressionist art in his house, quite a lot of it, and that to afford such a stunning variety he’d best produce it himself.

He began to paint, and now there are paintings all over the house — created by Charlie and critiqued and guided by Deb. The two met at Muhlenberg College in Pennsylvania. Deb, now an at-home mom, formerly taught deaf students. 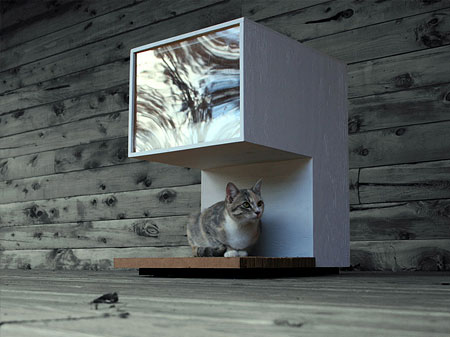