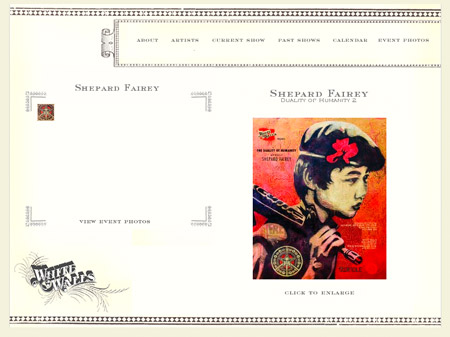 “The Duality of Humanity”

THE DUALITY OF HUMANITY: New Works by Shepard Fairey

Over 100 pieces will go on display at White Walls in a timely new show titled “The Duality of Humanity.” The show marks an evolution for the artist, whose unique form of reverse propaganda emerged from the spirit of the punk movement. With this show, Shepard touches upon, but also goes beyond the ‘calls to action’ against mindless consumerism and war evidenced in previous shows like Nineteeneightyfouria, E Pluribus Venom and Imperfect Union. “The difference between this show and the previous ones is that now the optimism of a potential Obama presidency is in the mix,” Shepard said. His recent work reflects his own personal shift towards a new optimism, a direct result of his involvement with, and inspiration by, the powerful political ideals of Barack Obama.

The title of the show, “The Duality of Humanity,” is inspired by the peace-sign wearing US soldier in Vietnam, ‘Joker,’ in Stanley Kubrick’s Full Metal Jacket. Fairey sees a strong parallel between the Vietnam war and the Iraq war. Fairey says that this show addresses  the “human struggle between good and bad, hope and fear”. One of the show’s central pieces is a child with a gun in his hand and a flower in his hat. The theme of soldiers and weapons bearing peace signs, or peace signs comprised of military effects, runs through many pieces in the show. Environmental themes also appear in some pieces, illustrating the tenuous balance between our dangerously uncontrolled consumption of non-renewable resources, and our well intentioned eco-concerns. Suffering and hope are seamlessly merged in a visual mash-up that defies expectations and easy answers.

“The Duality of Humanity” includes larger mixed media pieces on canvas and paper that have been covered with carefully collaged ephemera, self-printed patterns and found clippings from printed media. The backgrounds provide a seductive painterly texture and visual subtext, often allowing apropos words and images to bleed through the iconic images printed and painted over them. The multiple layers create a sense of depth, but also bring in temporal elements through preserved newsclippings, historic images and vintage printing effects. It is the images in the foreground, however, that give the work its power. They are crisp and provocative, communicating in a way that is direct and clear.