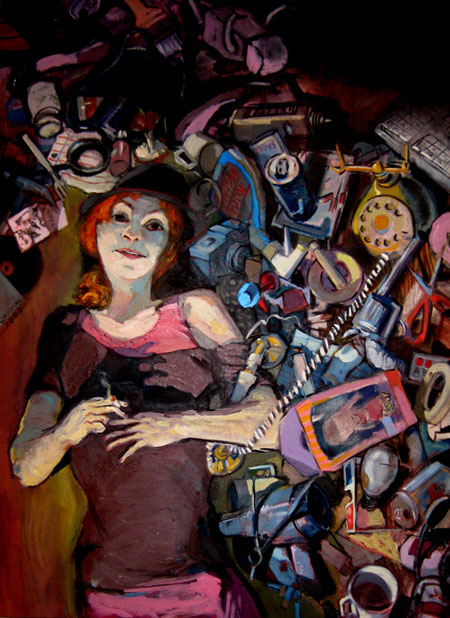 A Decade on Adderall

The Kinky Peanut: Hello will, id like to start off by getting a little background about who Will Koffman is? Please describe your education and/or training as it relates to your creative work.
Will Koffman: Good art has nothing to do with training, it has to do with inspiration and aspiration.  Art gets made because the artist believes in significance to what they’re doing.  People knowing your name and getting into your art rarely pays the rent, so there’s got to be something deeper.  I’m 20, and in my last year of a fine arts degree on scholarship at MICA right now, and school’s given me time to develop my ideas and get my name out with the pressure off, but my inspiration comes from somewhere else entirely.  A lot of my work is critique and it comes from the visual culture everyone absorbs and we artists participate in.  I work from reality and not fantasy, and that’s why people tune into my art, It’s about their culture as much as mine.  Reality is multi-sensory and takes place in space and time, Art is the frozen static moment where a history of sensations get caught.  Art works when it evokes empathy, and suddenly a viewer sees their reality through my eyes.

The Kinky Peanut: How do you describe yourself as an Artist to others?
Will Koffman: I use a variety of compositional approaches from collage to psychedelic to formal, and a lot of different media, from bleach to paint to comics, so I’ll never be pigeonholed.  I’m an illustrator at heart and professionally, although all these ‘fine art’ shows might throw you off.

The Kinky Peanut: From what I understand not only are you a talented artist but a musician as well, Can you elaborate?
Will Koffman: SCHS isn’t officially together anymore.  This was a punk band I was in from age 13 to 18, and we were rowdy as you might expect from Santa Ana punks.  We play about once a year now, since there are geographic issues and we’re all working other jobs and other creative projects, but the fanbase is still there and its good kicks.

The Kinky Peanut: Does your music influence your artwork?
Will Koffman: Punk is about destruction, art is about creation.  This is a fundamental conflict between two halves of my personality.

The Kinky Peanut: As an artist myself, I found myself drifting off in school and work to draw and explore different concepts. Did any of your current pieces start off as a concept in one of your spiral notebooks?
Will Koffman: I am driven to draw every hour of every day.  Sketchbooks are filled obsessively and continuously.  Art is like exercise, momentum is everything.  To me, the medium is the muse, and ink drawings necessarily take different turns than paintings or bleaches, so though ideas overlap, there is rarely translation from one to the other. 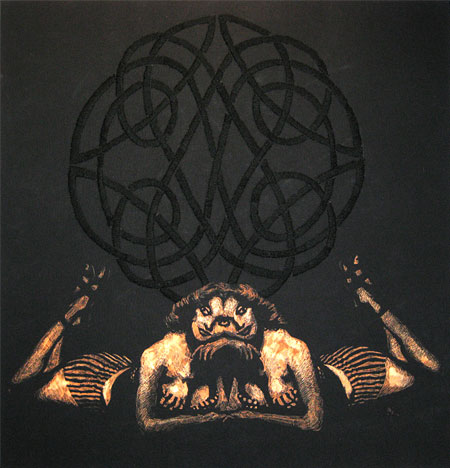 The Kinky Peanut: I noticed you have been involved in some collaboration with other local artists such as Laura Jean Breski.  Do you enjoy working alone or do you prefer getting others involved in your work?
Will Koffman: There is no working alone, you’re collaborating with the larger culture at all times, at the very least.  That said, I usually work on a piece solo, because I usually have an idea of what direction it’s going and enjoy the journey the piece takes me on, it’s personally satisfying.  Working alone allows psychological and theoretical motivations behind the art to mill around quietly in the subconscious and conscious while I’m working and show up in their own way.  With Collaborations, I like work that goes together seamlessly, where the artists are in tune with each other and mesh together into a continuous whole.  When the two styles stand apart so much that the dynamic comes chiefly from the contrast between the two artists, and the way the piece pulls apart, the whole of the piece is overwhelmed by the parts and cant come through.  I think this is why Laura Jean Breski and I collaborate so well, we work with harmony rather than discord.

In Illustration, the other animal, you’re always collaborating, and usually the artist is called upon to harmonize, so when I work with musicians or writers, you’ll see that I adapt a style to compliment the other’s creative direction.  One glance at my Weird Tales illustrations compared to images from my upcoming children’s book Abigail’s Adventure will make this abundantly clear, though they are both clearly me.

The Kinky Peanut: As a spin off from the previous question, do you feel your work has more impact when you work with others, or when you work solo?
Will Koffman: Working with others gives my art a concrete context, like ‘on a record cover – on a t-shirt – in a magazine.’  Context usually goes hand in hand with significance, and the more people involved, the larger the project, the more its going to mean, and to a wider audience it is going to appeal.  When working alone, my art tells more about me – my personal experience and worldview.  When working in collaboration, its talking about a community.  It really depends on what the viewer is more interested in.

The Kinky Peanut: Your art works tend to generally be on a larger scale as opposed to smaller scales, Is there any reasoning behind that, or do you just prefer larger works?
Will Koffman: I have big ideas.

The Kinky Peanut: One of the most fascinating aspects of your work is your bleach illustrations.  What sparked your interest exploring the use of household items to create your pieces?  Are there any other media’s you have experimented with?
Will Koffman: I’ve always played with media, and a look around my site will show a section of the spectrum from ink to silkscreen to oil to chalk to acrylic to collage, but bleach is my favorite medium because its mine – Only I can control it the way I control it.  It’s about corrosive chemicals and it’s about chemical culture.  It’s about revealing the unseen and giving by taking away.  It’s a medium and a metaphor.

The Kinky Peanut: What would you like on lookers to gain from gazing into your work?
Will Koffman: The experience of seeing it.

The Kinky Peanut: As artists, we all know that presentation is key.  Do you have specific guidelines when displaying your work?
Will Koffman: Instead of guidelines I have an ingrained aesthetic sensibility – the piece must look good in its context. 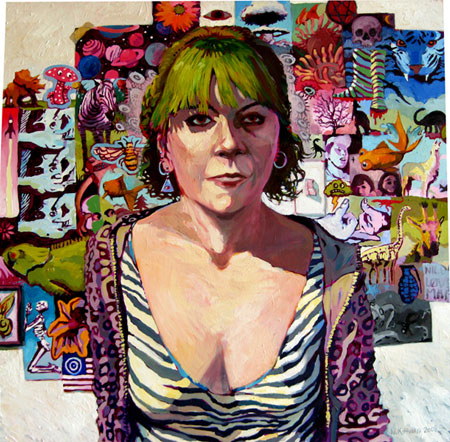 The Kinky Peanut: Aside from your current portrait show at Avanti Cafe, are there any other shows coming up soon?
Will Koffman: I always show.  Glow in the Dark Girls, my portrait show is currently up at Avanti in Costa Mesa, and there are some pieces from my Psychedelic Rock Art show on semi-permanent display at Sound Trolley Records.  I’ll have a Featured Artist wall at the 2009 OC Super Fair July-August 2009, and will have a summer show at the Artery in The Lab, at The bookman’s new gallery in Huntington Beach, and a show of illustration at Haute Cakes.  It’s likely there will be more by the time summer roles around, some arts events with the Costa Mesa Artists Council, a release party for Abigail’s adventure, some other things are in the works, but internet buzz is kept up for everything, and anyone who wants can email me at will@killmecomix.com to sign up for the email list which covers all new events and products.

The Kinky Peanut: What can we all expect to see from you in the future?
Will Koffman: Constant, unbridled newness.

More works from WIll Koffman 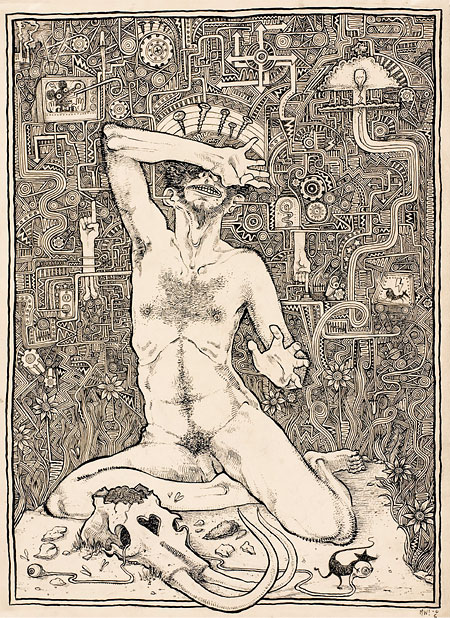 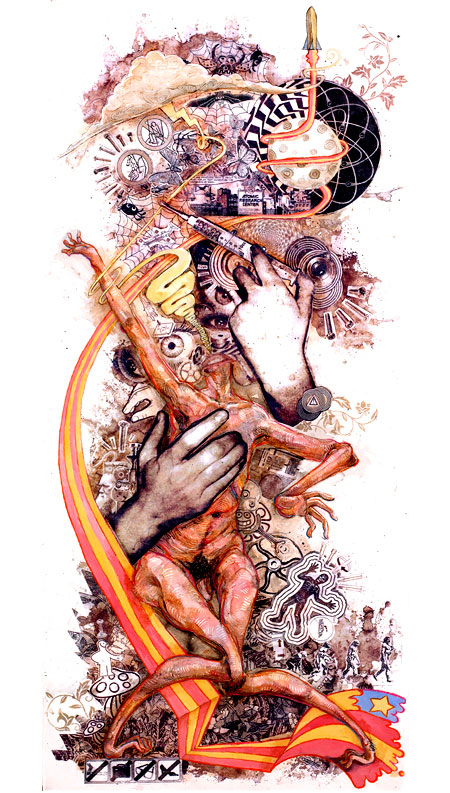 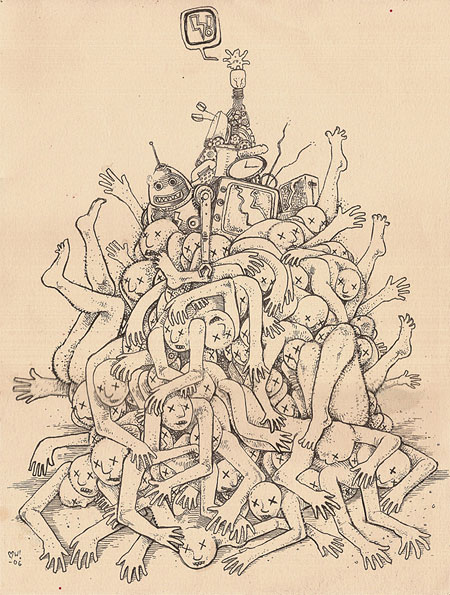 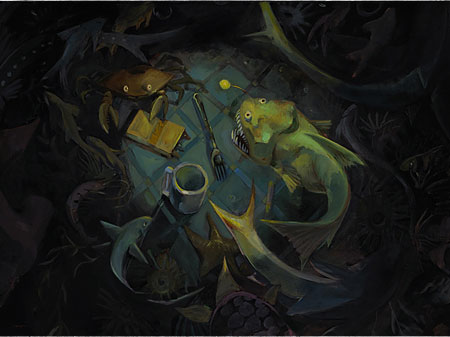 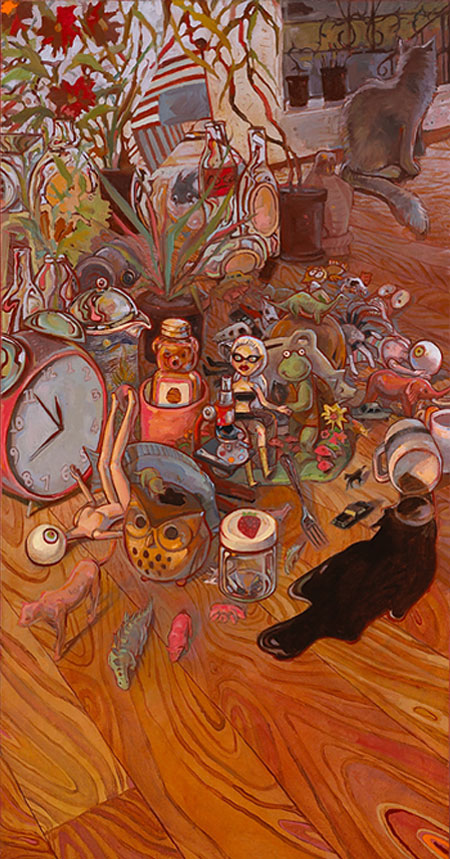 Getting Her Seal Legs 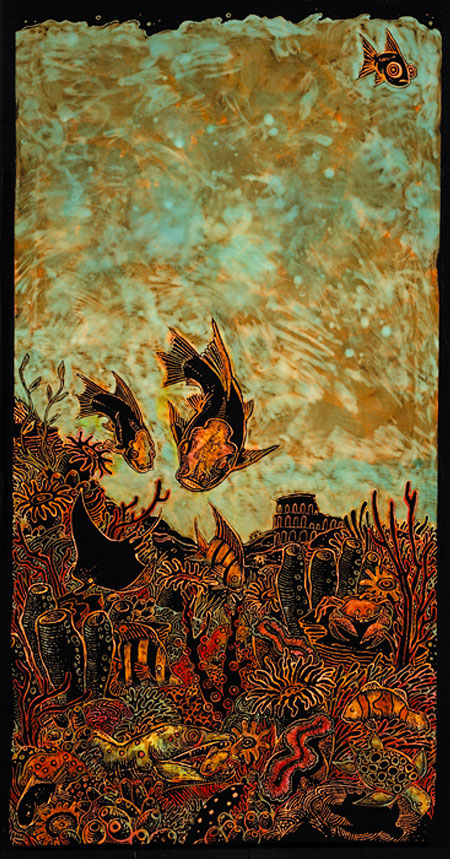 Learn more about Will Koffman and his spectacular Illustrations, paintings, drawings and prints, childrens books, Bleaches, and shows. 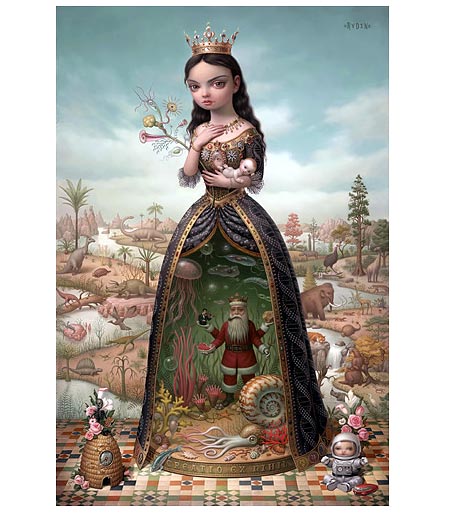 “The Creatrix” by Mark Ryden